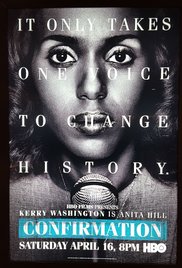 There are always two sides to everyﾠstory. Sometimes these two sides can be similar but in this case they couldn't be more opposite. In 1991, Judge Clarence Thomas was nominated by George W. Bush to run for a seat on the United States Supreme Court. At this time a woman by the name of Anita Hill was contacted for a background check concerning a sexual harassment claim. She confirmed that Thomasﾠhad sexually harassed her at their previous employment and asked for the news to be kept quiet. Of course, any big news such as that is never kept quiet. Her story was leaked and she was asked to testify against him in court. She agreed and it was the biggest story of the century. Clarence denied every allegation that Anita made and even brought up race, despite the fact that they were both African American. This is a movie based on actualﾠevents that will leave you questioning whose story to believe. All the while seeing the ripple effect that Anita had towards empowering women to speak out.