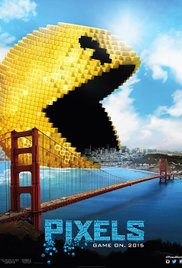 Game on... The 1982 Championship is the first of its kind. A world champion is crowned and geeks rule the scene. There is nothing like the classic games, they might be pixelated, but the gameplay was serious. That same gameplay carried into their futures. Whether they aspired to be President or just an everyday gamer, anything was possible. This part of history was so significant that video from the championship was sent on a probe into deep space. What was meant as a message of peace was misinterpreted. An alien race received the message and thought it was a hostile message towards them. What's their next move? To play us... We each get three lives, the first to lose all their lives, loses. The loss is more than a game though, the future of the planet is on the line. So who are the best to fight this fight?... The military? or the Gamers? This will take you back to your childhood. Actively engaging with the gamers and the games. The story is well put together and is told in a very fun and somewhat silly way bringing the classic characters of yesterday to life for a new generation. Though there isn't a lot of depth or meaning to this, doesn't subtract from its value. Taking classics from yesterday and turning them into a classic for years to come is a memorable feat. Go... Take your kids... and relive a piece of history while introducing it to a younger generation.