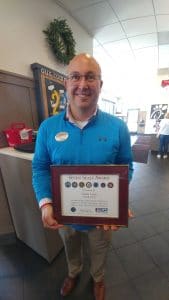 Charlie Colon, owner of the Southpointe Chick-fil-A (south 27th st) in Lincoln, Nebraska was presented with the Seven Seals Award for his support and dedication towards those who have served in the United States Armed Forces. Specifically, he had recently had signage installed to dedicate parking spots in the parking lot to those serving/who have served in the US Armed Forces. This includes the Army, Navy, Marines, Air Force, National Guard, and Coast Guard.

I was lucky enough to be eating at this particular Chick-fil-A during this ceremony. Charlie had been approached about having media at the event and he didn’t want the event to be about him. He wanted to focus to be on those who have risked/given everything to protect the citizens of the United States of America. My significant other and I regularly eat at this establishment and we have become friends with Charlie. Being there for such a momentous occasion, I wanted to showcase this event on Movie Deputy, not to showcase Charlie or Chick-fil-A but to recognize those who risk everything.

That being said, the amazing men and women that serve this incredible country of ours will always deserve the admiration and appreciation of everyday citizens. This particular award is to honor Charlie Colon for his efforts in showing his personal appreciation to those that have served. The dedication of the parking spots was not a corporate decision (though it did receive corporate approval), it was a decision that Charlie made to recognize those who risked all they had to guarantee us the freedoms granted to us by the founding fathers of this incredible nation of ours.